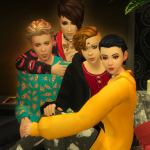 ryttu3k Posts: 937 Member
November 2019 in General Mods Discussion
Question about NPCC that I can't seem to find an answer to anywhere! I'm just getting it set up, and can't find any information on how many Sims are needed for each NPC career - the minimum number I need to assign so that others aren't assigned randomly.

Relatedly, if I have more than the minimum number, will they rotate? Like if the minimum amount of mixologists you need is four and I have six, will the same four always appear, or will any from that pool of six be selected?