White
Sign In · Register
Home› Feedback› The Sims 4 Ideas Corner
Never met your online BFF but want to? Share your story with us here for a chance to win an all-expenses paid, meet up with your BFF IRL.
The Sims 4 will be FREE to download across PC/Mac & Consoles on October 18! More info here: here
September 30th - It's time for our Friday Highlights! You can check them out here! 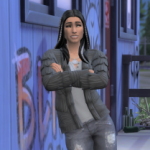 LiELF Posts: 6,010 Member
November 2019 edited November 2019 in The Sims 4 Ideas Corner
Okay, I've been thinking about this for a while now, and although I made a thread some time back about Mythology for Fairies, I think that idea may have been a bit too ambitious, so I have a new one that I think would work better with Sims 4. Ready?

Okay, hear me out. People want Fairies, people want Werewolves, people want stories. People even want Imaginary Friends. This is the pack for all of that. You might be asking, "but LiELF, how do Werewolves fit into this theme?" Well, because "Big, Bad Wolf", silly! I see this pack as being inspired by the fairy tales of old, but with the grit of the Grimms brothers, whose tales were a little darker. So Fairies could be both "Seelie" and "Unseelie". Light and mystical and fun, or Dark and mischievous and terrible. Winged pixies, bent-eared Goblins, Elves, Woodland Dryads, Werewolves, Wisps, and Shadows could all be part of this theme. (And, of course, Gnomes.

) This pack should be malleable, and full of tales for the player to tell, whether they want them to end in joy, tragedy, horror or banality.

World: I picture a world of magical Fae Kingdoms and woodland magic and cottages, with maybe a little bog area and a secret cave or treehouse. It should have both the light and the dark areas. Maybe somewhere is a bean stalk leading to the clouds and a secret lot. Various magical trees with portals to take you to different parts of the map. Maybe some lead to adventure and the Sim returns changed! Perhaps there are places where children get lost, like in the child-stealing tales of old, that parents used to tell their children to make them behave. Perhaps there are things in the world that only children (or those with childish natures or blessed with Glamour) can see. Who knows? The Fae can be stranger than even Aliens.

CAS: The new Occult types should have two forms. Not just for Werewolves, but for Seelie/Unseelie Fairy Folk as well. Perhaps a selector to choose this so that the "aura" is either dark or light. There should be all kinds of new features like longer pointed ears, snouts, new teeth, warts and moles, facial lines, horns, wings, and nails/claws and body hair/fur. There could be new tattoos of caern spirals and tribal designs and representations of the Wyld and chaos, in varieties of colors. Hairs would be very strange and asymmetrical, some looking like bedhead and some with flowers and pebbles and feathers woven into them. There should be new makeup with face markings that sparkle or change, and new skins to resemble opals, bark, and fur. And clothing could have leathers, hides, leaves, furs, webs, flowers, vines, and of course, Grandma's nightgown. New Traits could include Prankster (autonomous mischief maker), Child of Gaia (happy with plants and nature, bonus to gardening), Carnivorous (must eat meat - Werewolves), Empathic (mimics other Sims' emotions).

Build/Buy: More Fantastical stuff! Tree house builds, plant houses and stony cottages. Magic mirror objects, toys that have "spirits" or come to life and move on their own, more "natural" furniture, viny beds and thorny sets. A cobbler's station. A spinning wheel with a new spinning skill that at master level allows you to spin straw into gold. Enchanted fruit that puts Sims to sleep. Magical fish. Fairy Dust that makes everything sparkle, or Goblin Ash that turns things mossy. Moss and algae for bog pools. Willow trees.

Gameplay: Okay, so I don't have this idea completely worked out, but I think that the main gameplay in this pack should maybe revolve around a brand new create-a-story tool. Something that allows the player to set up their own Tales and play them out, kind of like StrangerVille but much more expansive and varying. Even if there were a variety of templates to choose from and the player filled in the specifics and got to choose the Sims involved. The Sims 4 is heavily promoted as a "tell your story" game, so I'm calling it out and challenging the devs to give us a storytelling feature of our own, lol. (Psst. And please make it easily moddable so that modders can give us new story options.

) But if we can't get something like that, then I'm sure there have been many, many other creative ideas posted on these forums revolving around Fairies and Werewolves that can be taken into consideration.

And lastly, even though they're not my favorite, I'm going to recommend a Plantsim update for this pack. They would fit right in.

I see this pack as being something enjoyed by both Family Players and Occult Players. It would take the wild imaginations of children and bring them more to life in an entire world. Children are known to be revered by Fairies for good or ill in these old tales. They should be important. Imagine a sprite giving candy to a toddler and then watching them float and giggle and sparkle. Or a Goblin stealing them away to their household.

For those who stuck with me through this, thanks for reading and feel free to add your thoughts.