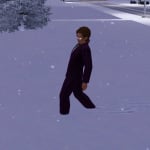 carlystur03 Posts: 374 Member
November 2019 in The Sims 3 General Discussion
(Warning: this is kind of long. It's late and I felt like sharing this after finishing playing for the night.)

My first Alien Abduction baby has been born!

I've had a male sim get abducted many times and not once did he ever get pregnant from the abduction.

One of my longest-running families that I've got going on right now actually had the first Young Adult son of the founding couple get abducted and pregnant on the first go.

I've already got 6 other sims in the household right now: the founding couple, the Young Adult son and his wife, their twin son and daughter children, and now the alien baby girl.

This is the largest household that I've ever played from starting with a single founding sim! So, I'm kind of debating on if I want to send the twin children to boarding school(s) or not.

And, this family has so much money at this point that I could just buy my founding couple another house to retire to and keep playing as them with their YA daughter since she, apparently, keeps getting dumped after being engaged, according to Nraas's Story Progression mod doing its thing. I might just do that. That'd be a really big household, though! The biggest I've ever played with!

I've actually kept a save file for a separate version where the Alien could still be sent back to the alien world, just in case I do decide to revert back to how I had it before the alien abduction. I might post pics of the family later on if I think about it next time I go back in that game to take some.
6