White
Sign In · Register
Home› Discussion› The Sims 4 General Discussion
January 21: Today is patch day! 😃 To read the patch notes, click here!
January 22 - Is everyone ready for the Friday Highlights? Check them out here.
Welcome to all NEW SIMMERS joining us on the Sims forum! 🎉 Have fun on the forum and please make sure you check out the forum rules and
the rules about necroposting. 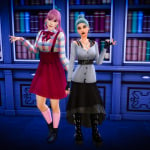 SarahsShady Posts: 945 Member
October 2019 in The Sims 4 General Discussion
There isn't much at all for children sims to do. I really wanted them to be included in mermaids and RoM, they are ignored. It was awesome they included children in the vampires pack, but why are kid sims getting snubbed with the latest packs?

&Why make a Harry Potter themed pack and then not allow any children to even learn magic?
Does anyone know of a mod, maybe?
Im so sick of having to search for a mod to finish the work that should've been done by EA. JS