I have a problemo.. 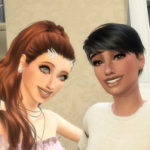 theaethanrealm Posts: 62 Member
September 2019 in The Sims 4 Challenges, Stories and Legacies
I'm doing the rags to riches challenge, and it's going amazingly. My sim's name is Vivienne Calloway and she has a pretty nice house with almost 60k to spare. She met this boy from Sulani, and they hit it off immediately. They started dating, and she discovered he was a mermaid, but it was okay with her. They loved each other a lot and Vivienne eventually fell pregnant! Here's where I ran into the issue. Vivienne has worked so incredibly hard to get the life she has today and I know she wouldn't ever leave it to go live in Sulani. However, the mermaid is a child of the ocean and would never be able to be anywhere else. They had to break up because of these differences, they'd just never be able to be together and live with each other and have a happy life. Clementine Calloway was born, and the couple came to an agreement. Since there was a 50/50 chance she would be a mermaid, they decided she would stay with her mom in Willow Creek if she was a human and move to Sulani with her dad if she was a mermaid. She became a toddler, and she was a human! Vivienne was happy to keep her, and her dad visited often. Clem's parents weren't dating, but they're still best friends. Eventually, Vivi got another boyfriend, her fun yet jealous neighbor Jack Barrow. Clem just became a child and I also just realized that Vivi is pregnant with Jack's baby, but I just don't think they're right for each other. Clem's dad was perfect for Vivi and they were honestly the best and most amazing couple ever, but they had to end everything because of one big issue. What should I do? Who should Vivienne end up with?
origin id - theaethanrealm
0