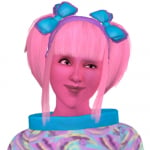 VermilionSphere Posts: 100 Member
September 2019 in The Sims 3 General Discussion
has anyone tried to remove the Town Clock located near Simagon Alley ?