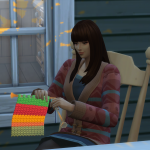 Simmingal Posts: 2,153 Member
September 2019 edited September 2019 in The Sims 4 Packs Discussion
Welcome to the Realm of Morgyn, a thread to discuss all things Morgan Morgyn!
Play ideas, speculation, reactions and opinions are all welcome to this thread!

Have you perhaps already thought about how you are going to use this character in your game?
Do you feel they named this character right?
Are you excited to meet Morgyn or perhaps *shocked gasp* you don't like Morgyn?
19