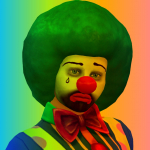 Smarties100 Posts: 1,003 Member
August 2019 edited July 2020 in The Sims 4 Challenges, Stories and Legacies
Even Stevens: Welcome to the 5th Season of Abnormality. My name is Even Stevens and I am the host of Abnormality. Abnormality is a Sims 4 Interactive Reality Show where 12 Contestants will be isolated in a house for 9 weeks competing for the ultimate prize; 500,000 simoleons. If you are interested in entering a sim into this competition make sure you read all of the rules below and good luck! Further information can be found below, as can links to the previous seasons. 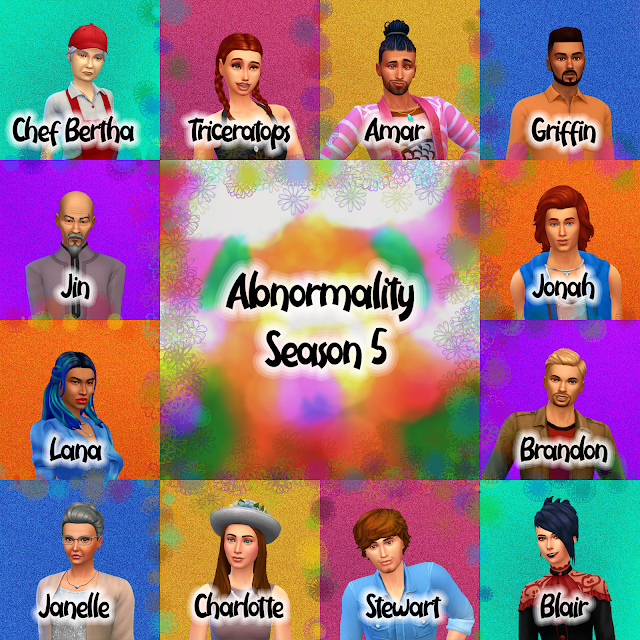 Often called HOH it is a challenge that everyone competes in to win the chance to gain the power in the house. The HOH will receive immunity that week and will nominate 2 players for eviction. The two nominees chosen will face each other along with the HOH and 3 randomly selected housemates in the POP competition.

The nominated houseguests who have been nominated by the HOH will have to face eviction but their fate rests on the hands of the other housemates. The housemates who are not facing eviction will vote for who they want to be evicted. The nominee with the most votes will be the person to leave the Abnormality house. If the house fails to come to a majority vote then the HOH will have the decision to cast the deciding vote.

DRE's are video entries/confessionals that the housemates can make which see's them talking about anything while they are in the house. Housemates could be talking about game strategy, trivia, relationships in the house or just random chit-chat. Examples of these can be found in episodes from the previous seasons.

This season's twist can be found in the second post below.

IMPORTANT!
You must enter a sim that YOU have created, I don't want anyone to steal someone else's sim. Please try and enter your sim with hardly any CC if you can. I have had issues with the game lagging and any more CC that we don't really need will slow the game further.

YOU MUST SUBMIT 2 SIMS OF YOUR CHOICE; 1 MALE AND 1 FEMALE. OUT OF THE 2 SIMS SUBMITTED I'LL CHOOSE WHICH SIM YOU'LL BE PLAYING AS TO MAKE SURE WE HAVE AN ARRAY OF DIFFERENT PERSONALITIES IN THE CAST

YOU MUST SEND YOUR SUBMISSIONS THROUGH MAIL ON THE FORUMS.

I have the following Expansion, Game and Stuff Packs:
Expansions: All
Game Packs: All except Strangeville
Stuff Packs: All excluding Moschino Stuff, My First Pets, Toddler Stuff, Kids Room Stuff

Please can you send the following application as if you were talking to the public at home watching and not your fellow housemates! I will provide an example of the app underneath the app for you to get an idea of what I'd like from you.


Username:
Origin ID:
Male/Female Sim Name:
Intro to Camera:
Tell us about yourself:
What made you apply for Abnormality?:
Who is your favourite past player?:
Have you any last words before you enter the house?:
Notes for Smarties:

Here is an example of what to write in the episode:
https://abnormalitysims.blogspot.com/2018/10/40-meet-contestants.html

Other questions to answer:
Nice or Nasty?
Friendly or Rude?
Loud or Quiet?
Funny or Dull?
Clean or Dirty?
Active or Couch Potato?
Music or Silence?
Love Outdoors or Love Indoors?


Example App:
Intro to Camera: Hi guys my name is Carlos, I'm 27 and I'm from Arizona!
Tell us about yourself: I have a family of my own, I've got a beautiful little baby girl called Maya. I used to live in LA but moved to Arizona when I met my girlfriend; Tonya. I've lived there ever since. I work at a deli shop during the day but work as a DJ at night. I also know how to play the flute, I know exciting stuff!
What made you apply for Abnormality?: I've been a fan of the show a while now and have always wanted to be on it, so I applied and luckily got a spot on the show.
Who is your favourite past player?: Where do I start, I've got a few. Do we have all day?
Have you any last words before you enter the house?: Let's make this season, epic!

PS- If you would like me to create your Sims in game please do ask, I will be happy to help.