Tell me about your criminal gangs 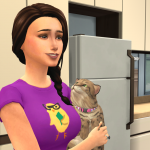 QueenofMyshuno Posts: 1,412 Member
August 2019 in The Sims 4 General Discussion
I’ve never had a criminal gang before, but I’m planning on making 2 rival gangs for my current save eventually. I would love to hear about your gangs, how you set them up, what you did with them, if they had gang headquarters, funny or surprising things they did, stuff like that, so I can get ideas. Screenshots welcome if you have them.

On EA forum Stories and Legacies board and on QueenOfMyshuno.tumblr.com
2