How many played sims do you have (in one save)? 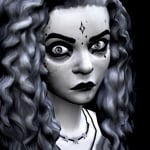 RavenSpit Posts: 658 Member
August 2019 in The Sims 4 General Discussion
How many played sims do you have in one save and what are they (occult/human, age)?

I am just always curious how other people play