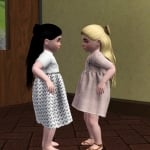 Iceey Posts: 101 Member
July 2019 edited July 2019 in The Sims 2
So this cashing happened when I was aging up the first elder in my world. I aged her up and all was good, then I get the option to age 3 NPCs and while the 3rd one was aging up it crashed. I went in there again, played till the birthday and saved before she blew the candles. I aging aged up the NPCs, because I thought it was just a random crash. It crashed again. So I went again, didn't age up any NPC and it didn't crash. Her husband was next, aged up 3 NPCs, no crash. Great. Fast forward to today where I was playing another one of my families where the sims were close to aging up to elders. I saved before the birthday (I think this is gonna become a habit, knowing that my game might crash), aged my sim up, aged 3 NPCs up, all was good. 5mins later, I crashed. I didn't save unfortunately. I again went into the game, did same thing, crashed. And honestly, I'm tired of avoiding families where ik the sims will be elders. I like aging all generations in a consistent way, knowing that TS2 doesn't work the same as TS3 does in terms of aging. The only issue I can think of, is me not having applied the 4GB patch correctly, since I can't find any guides for TS2 UC, only TS2. Other than that, I don't know. I can play a whole day without crashing, so I know my game is fine in terms of any bad cc or mod or stuff like that. If anyone knows why these crashes happen whenever I age up NPCs to elders, and knows a solution, I'd really appreciate the help.