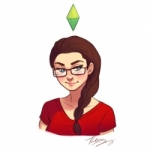 This Pride Month I'm coming out of the closet... As a an EA Game Changer, that is. Surprise?! (I'm already out as bi, if you were wondering).

Anyways, on to the point of the thread...

Thanks to the EA Game Changers program I have infos. Secret infos. I can share when the embargo lifts on Tuesday.

If anyone has any questions, ask away and I'll answer as best I can when I am allowed to.
Post edited by EmmaVane on June 2019
Gallery - Showcase
Green - Dex - Ilbeech - Moré
22