White
Sign In · Register
Home› Creative Corner› The Sims 4 Challenges, Stories and Legacies
July 31 - Everyone ready for the Friday Highlight? It's ready for you here!
July 23 - A patch for The Sims 4 is ready for you to install it! Check the patch notes out here.
The Sims Spark'd is here! - are you ready? Discuss episode 3 here! 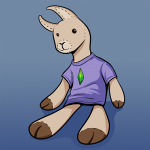 Dollyllama108 Posts: 161 Member
May 2019 edited March 9 in The Sims 4 Challenges, Stories and Legacies
Calling all Sims who microbrew kombucha to barter with tattoo artists, who have to take off their midi rings (yeah, plural) before doing a barefoot handstand against a tree, who spend their time either being at Burning Man or preparing for Burning Man, who sell jewelry made out of antique forks at the farmer's market, who have an anti-capitalist screen printing setup in their garage (not necessarily the same Sim who was selling fork jewelry earlier), who hated the RENT movie, who operate outside The System for whatever reason: non-binary awareness activist River Indigo is seeking members for their new band, Venus in Retrograde. Think alternative R&B with simmering lyrics about intersectionality and body positivity.

Possible roles include producer, mixing engineer, vocalist, or instrumentalist trained in percussion, bass, guitar, winds, or brass. Please specify in your application which role you're applying for and your PGP. All identities welcome. Thank you for reading, and good luck!

Venus in Retrograde will appear in Catastrophe Theory, a black comedy exploring how pain can arise even in the sheltered world of The Sims 4 and how different personalities create/deal with it. Here are some guidelines for fitting in to this perpetual disaster of a storyline:

If you'd like to participate, tag your favorite Bohemian weirdo with #VenusInRetrograde.

I'm excited to see who y'all come up with!

Catastrophe Theory: happy sims are all alike; every one of these dumpster fires is unhappy in their own way
0