White
Sign In · Register
Home› The Sims 3› Creative Corner› The Sims 3 World Builders
April 30 - It's time for our Friday Highlights! You can check them out here!
May 13: Today is patch day! 😃 To read the patch notes, click here! 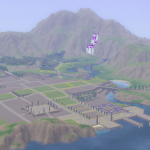 Pan_Nymira Posts: 45 Member
May 2019 edited May 2019 in The Sims 3 World Builders
Hi guys and thank you for clicking!

I’m all new to the forum. This is my first time posting and the first world I’ve build in CaW. Feel free to leave constructive criticism of the world in the comments – if you find something about the world off, odd or lacking you are more than welcome to say it. It will help me make the world better!
I am a slow worker, but I plan to post about my progress here regularly!

Goals
About the world
The world is called Pan Nymira (I named my account after it...). I have some lore, though I’m not sure it’s relevant, but since I’m a big fan of storytelling I just can’t help myself, haha. The world has a lot of nature, but the city is quite big and compact (1/4th of the map) and squeezed into one corner of the world. There’s going to be a palace and four castles or mansions. I have issues with Edit in Game, so I’m not sure when I can actually build lots. I love waterfalls, so there’ll be at least five or those, a forest, fields and some hidden lots spread around. It should feel like, even if you leave the city, there’s a lot to explore.

Pictures
I couldn't figure out how to post the pictures directly in here (the image option doesn't seem to work, but the link one does perfectly), so I setup a gallery on imgur by this link: https://imgur.com/a/2OGH05I
I hope that's okay.

First some overview pictures. I have removed the fog so you can see the world clearly, but sadly that removes the ocean and rivers, so it looks a bit odd. I couldn’t zoom out enough to see the entire world at once, so I took two screen shots and tried to overlap them. The odd line in the center is a result of that.
I hope the pictures can help you get a feel of the world and how it looks.
Post edited by Pan_Nymira on May 2019
2