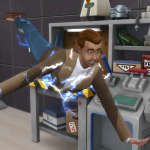 I was surprised by his aspiration and despite the fact that "he means no harm", I can't help imagining him taking the matter in his own hands if the infection spreads, and by that, I do not mean giving vaccines. He's an ex-military guy and he is also hot-headed and paranoid.

I could see him planting booby traps in his front lawn, maybe a cow plant (he was quite turned off by the welcome wagon) but he has no gardening skill.

I also imagine him hack his way in the lab (he spends so much time on the computer), lock the infected sims in the lab and display fireworks.... Ehm. But would that even work?

How did you play Cahill?

Any idea how he could create... Ahem... Ghosts?

Or he should just stick in his bunker?
I want to play ALL the premade families! One day...
3