White
Sign In · Register
Home › Creative Corner › The Sims 4 Sims and Modeling
February 21 - Everyone ready for the Friday Highlight? It's ready for you here!
February 14 - 3rd vote results for the Community Stuff Pack are ready! 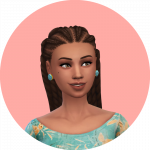 In my opinion CAS is where The Sims 4 has made the biggest leap forward compared to the previous iterations. I have alot of fun making outfits and this is the place where I will post most of them from now on. Mainly because I always feel a bit awkward flooding threads with my CAS posts, when most people are interested in gameplay, but also because feedback has shown that there are a few forum members who appreciate a bit of inspiration. I use the pictures myself when I want to make a quick (townie!) makeover, so I think this is probably where this thread can come in useful for others.

Custom Content
We as a community know that we are blessed with some of the most creative and talented creators of custom content and mods in the world of video games. While I use a moderate amount of Maxis Match CC in my game, I will avoid CC in this thread for the most part with some exceptions:
- Poses: Unfortunately this is something CAS does not provide and the animations can become repetitive. Most of them are made by Flower Chamber and Ms Blue. I do not make poses myself
- Skin replacement: I have one default skin replacement, which is Smootish II by Luumia. I do not use any other overlays etc
- Lipsticks: Make-up is a passion of mine IRL and while I think we are pretty good regarding eyeshadows („More is better!“ – said every simmer ever), I need more lipsticks in my game

I will not be doing a lot of picture editing, as I would like to spend most of my time in CAS. The thread’s purpose is to help with outfits, perhaps an extension of the ‚Styled Looks‘ section in CAS, if you will. Also, I will be doing throwbacks to older packs and posts focussing on outfit categories.

I hope you'll find something you like!
If I just posted an outfit you like, I have good news - there is more where that came from!
https://forums.thesims.com/en_US/discussion/956513/netz-a-porter-outfits-ready-to-wear-for-your-sims-no-cc-required