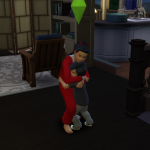 LluviaRain Posts: 2,199 Member
January 2019 edited January 2019 in The Sims 4 General Discussion
I want a break from challenges, but I’m not sure what to do instead. If someone could come up with a gameplay idea or sim backstory idea, it would be really helpful