You can now read written books at the microphones! 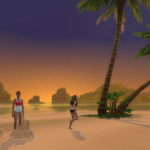 alan650111 Posts: 3,007 Member
November 2018 edited November 2018 in The Sims 4 Packs Discussion
I had my one sim Shay tag along with a couple of her teenage grandkids to a talent show at the one bar. I was delighted when I realized you could now read your written book at the microphone for the talent night! I forgot that she had even written this book about flower arranging so it was an amazingly organic moment of storytelling with the game. Her granddaughter Topanga was the main reason she was going there because she's a rising actress. This made me picture the older woman, who just had twins late in life, as wanting to shine a bit too. What was funny, and I think it's because Topanga has the new self-absorbed trait, is that Topanga started playing the violin right next to her reading grandma as to get the spotlight back on her! Needless to say I had some genuine Sims fun at that talent night. I absolutely LOVE Get Famous! What a surprise of a pack!
Post edited by alan650111 on November 2018
31