White
Sign In · Register
Home› Discussion› The Sims 4 Packs Discussion
July 8 - A patch for The Sims 4 is ready for you to install it! Check the patch notes out here.
July 8 - The Sims Spark'd, coming July 17th! 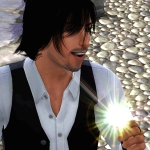 CK213 Posts: 18,471 Member
November 2018 edited November 2018 in The Sims 4 Packs Discussion
Whatever the form, text or pics, post them.
Because I am, every-time something interesting happens, and I don't want it to just be me.

I am finding myself smiling a LOT with this new pack.
Whether its deeper, or subtle game play that I have discovered, interactions with this worlds townies, or the synergy with other packs, so much is happening to delight me. They are probably little things, but I am really enjoying these situations.

And I want to share it because not many are interested on my side of the screen.
This game is getting bigger and interesting things should be emerging as the complexity grows.
How is Get Famous stirring things up for you?