White
Sign In · Register
Home › The Sims: Legacy Titles › The Sims General Discussion
January 27 - Time to vote for the CAS items you want to see as part of our Community Voted Stuff Pack!
January 24 - New Friday, new Friday Highlight! Check it out here!
January 16 - Patch day for The Sims 4! Find the patch notes for PC/Mac here, and here for console (someone said Gallery?)

Something is up with these guys (photos) 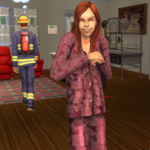 LaBlue0314 Posts: 16,524 Member
November 2018 edited November 2018 in The Sims General Discussion
I have taken a break from playing Sims 4, until either the game is patched or I add the next pack that is coming out, haven't decided yet. Anyways I just added MySims to my collection. I didn't even know you could get this on Origin until I stumbled across it the other day. It's been like forever since I last played this game. Anyways something happened while I was playing, and was deciding on where I wanted to show what happened, and I got to thinking about some of the trouble our sims in Sims 4 can get with the rocket (and as far as I know Sims 4 is the only one that has an actual rocket), so I thought why not share it with this forum. My sim came across some other sims working on a rocket, but with a slight twist, they decided they were going to launch a vampire off into outer space. My sim is the girl with the red ponytail.

Right after this, I had her working on a rocket, again, but this time no one was inside.

Success, this time it didn't crash.