White
Sign In · Register
Home › The Sims 4 › Discussion › The Sims 4 Speculation and Rumor
January 17 - Friday Highlights are back! Come take a look!
January 17 - Ready for a -not tiny- livestream? Click here!
January 16 - Patch day for The Sims 4! Find the patch notes for PC/Mac here, and here for console (someone said Gallery?)

Are cars and burglars next? 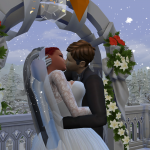 Aeroprincess87 Posts: 6,257 Member
October 2018 in The Sims 4 Speculation and Rumor
Looking at the new info on Get Famous and I'm starting to wonder if EA is majorly hinting that burglars and cars are in the works. I mean, the new neighborhood has drive ways galore and a new vault system to keep money in which makes no sense since no one can currently steal from our sims. Hmmm....
3