Disabilities for Sims 4? Tea leaves are leaning to Yes 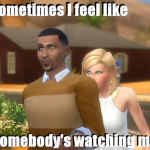 Samsonguy9000 Posts: 750 Member
September 2018 in The Sims 4 Speculation and Rumor
SimsVIP just posted an article on SimGuruGrant, Grant Rodiek, chatting about thoughts on including disability features to Sims 4. Paraplegics, deaf, blind, and likely others are on the table, and it's looking like Grant's already been putting a lot of thought into this. He's even thinking wheelchairs will be wanted by elder sims, as well. Mischevious sims could fake being blind just to troll others or even avoid contact if they are loners. So many potential ideas that this might just make for a full expansion adding in physical therapy and assisted living careers.
This is something I am all for. Not only that, but this is something that will be challenging to the Maxis team to implement. I will be keeping my ear to the water cooler for further news on this.