Can we make a list of what Cats and Dogs Thought bubbles mean? 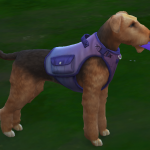 Simburian Posts: 5,100 Member
November 2017 in The Sims 4 Packs Discussion
I could start off by my finding out that the little "dog bubble" over my dog's head meant that he needed some love and attention. My Sim had apparently left him by himself in the park when watching a chess game.
4