Using lots of images or hitting us with an absolute novel? Please be courteous and use a spoiler tag for your post. Thanks!
August 12th- It's time for our Friday Highlights! You can check them out here!

Friends of Foes: A simLit - On an indefinite Hiatus 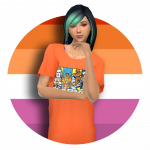 A teenage boy is thrust into the role of king when his parents and aunt are murdered by the infamous hitmen, the Sweglords, who have unfinished business with the secret organisation, His Evil Services. With the threat of war and the growing numbers of Sweglords in leadership roles, the new king and his friends struggle to stay close and to hide and maintain their friendship with one of the Sweglord's sons.

Updates: Saturdays.
To keep updated, you can follow this thread or follow me on twitter and/or tumblr. I also add links to the chapters on my wordpress site, which you can view here.

Click on the index to read the chapters.
INDEX

I think I have attached the prologue below. Hope you enjoy.

Prologue: Back In Time