White
Sign In · Register
Home› Forum Archive› The Sims 4 Help Center Archive› PC / Mac - Bugs & Gameplay Issues
January 15 - Is everyone ready for the Friday Highlights? Check them out here.
Welcome to all new Simmers joining us over the holiday season! 🎉 Have fun on the forum and please make sure you check out the forum rules and
the rules about necroposting.
December 22 - It's the time of year again: Join the 12 Days of Simsmas! 🎄
You are browsing an archived read-only section of the forums. The Sims 4 Help Center can now be found here.

Missing texture on "Straight Not Slanted" 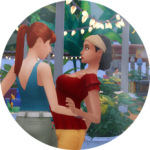 Karlia Posts: 310 Member
November 2017 edited November 2017 in PC / Mac - Bugs & Gameplay Issues
So using the middle brown swatch of the "Straight Not Slanted" shingles (with white trim) leaves my house looking like this:

I mean, it looks interesting for sure... But I don't think this is how it's supposed to be! Does anyone else experience this as well?