White
Sign In · Register
Home› The Sims 3› Creative Corner› The Sims 3 Stories and Legacies
August 7 - Everyone ready for the Friday Highlight? It's ready for you here!
Are you ready for the The Sims Spark'd? Discuss the final episode here! Don't forget to use spoiler tags! Need a refresher? Click here! 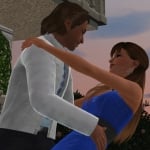 bekkasan Posts: 8,689 Member
September 2017 edited March 8 in The Sims 3 Stories and Legacies
I post this story on another thread, but am putting it here to keep it organized. Comments and critique are welcome.

1/2/19 Edited original post to place the family tree's for the growing family to help with organization and it will be easier for me to find later to adjust.

I did the family trees for my other family save so decided to do them for the Ballan Family as well. I hope this will help any readers keep things straight since I play all my saves so haphazardly.

Victor, a vampire and his wife Gardenia, a witch are the founders of the family. His sister Autumn was brought in to the fold when @aricarai remade the pizza girl and I had to have her version in my game. The children are Alice, a witch, twins Josef and Jillian, vampires, Dylan, a witch, and twins Lucas and Lexi who are hybrid vampire/witches with the mod from Nraas.

Alice is now a young adult and married to Adam Moonwalker, a werewolf. His mother was a fairy and he and his friends next adventure will be to track his family on his mother's side. 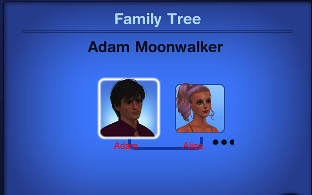 Autumn married Rafe Sinclair, a vampire and former pirate from Barnacle Bay. They have two children Will and Christina, both are vampires. 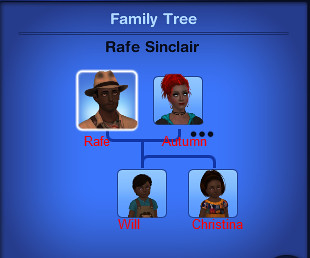 Seth Armor is Rafe's best friend, business partner, bro, might as well be a brother. He is human, recently almost a mummy. He married Shea, a fairy, who escaped from the clutches of the dastardly Lestat. She was taken in by Rafe and Autumn and became their nanny while she recovered from her abduction. 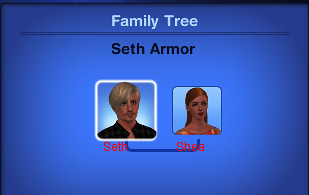 Marshall Flynn is Adam's best friend, turned to a werewolf by Adam after Marshall was attacked and dying. Marshall married Jennifer Doe who is human. Jennifer is Alice's best friend. Marshall has two sisters Maggie (also a best friend of Alice), married to Joseph Doe and Cora. Joseph and Maggie have had their first child and I forgot what they named it! 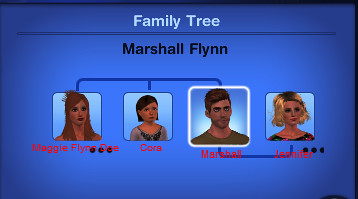 Dedric George is another best friend of Adam's. He was originally hired by Victor to help look into Adam's fairy family. Dedric went to university with them and they all became best friends. He will be able to help them as they travel in lands that are traditional to fairy's. Hopefully, Dedric will meet someone special while they travel. 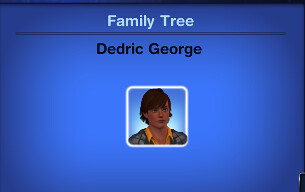 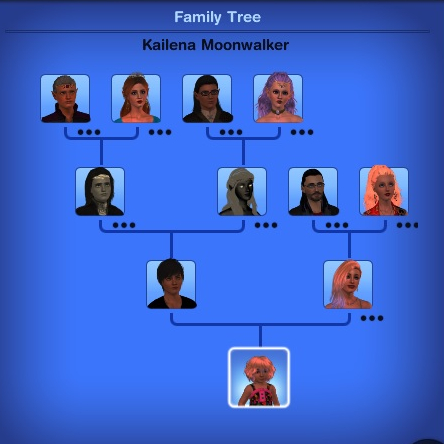 This is Ballan Manor (not sure of the in game name), but the sim family is Ballan so the new name made sense to me.

You can see how light the sky is on the left of the picture, but the mountain is still dark and ominous and makes the lot pretty dark later in the day. I wish my sims had some dynamite and could take care of that huge mountain that way. 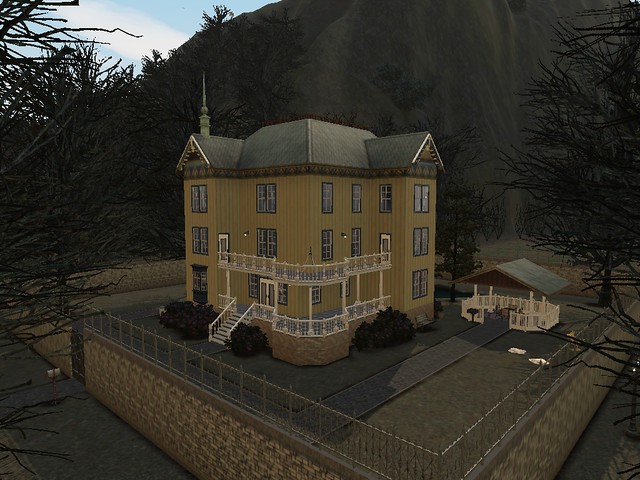 Victor Ballan, master vampire has brought his new family back to Midnight Hallow after centuries of being away. He married Gardenia, a gentle witch who found the heart that he though had been lost when he was turned. He has had many loves over the millennia, but, Gardenia is the other half of him, his bonded life mate, and without her he will not live on. She is refusing to turn unless there is no other option. She is a light witch and as much as she loves him and their children, she does not want to live in the dark. They plan to live in his old home and study alchemy, researching the old records in the manor to find a way to stay together forever. 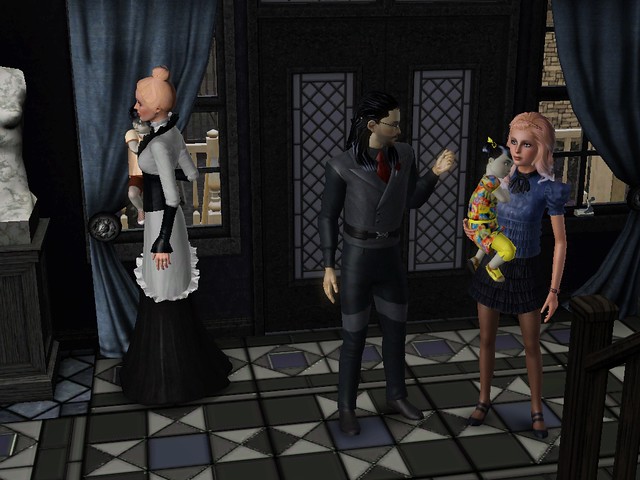 Victor Ballan is brave, perceptive, proper, athletic and a snob. His favorites are the color black, electric music (weird choice, but left it) and O+. His wish is of course, to turn the town. 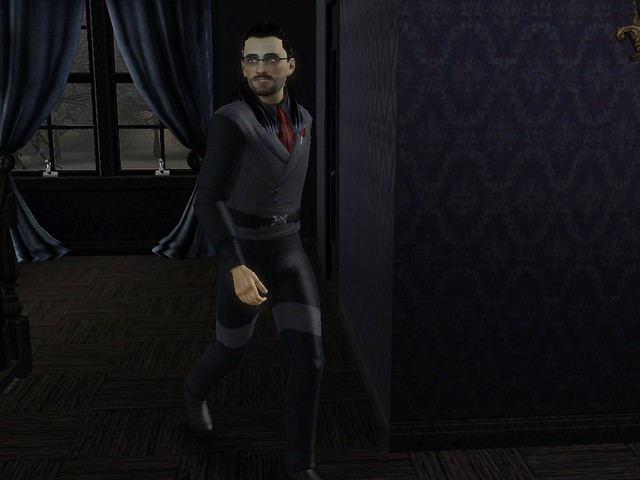 Gardenia Ballan is brave, perfectionist, gatherer, hopeless romantic, and has a green thumb. Her favorites are the color red, pop music and she loves pancakes. Her wish is to master alchemy and find a way to stay with Victor. Gardenia is playing with their son Josef who is brave and athletic and a vampire like his Dad. He likes the color spice brown, custom music and cookies(a boy after my own heart). 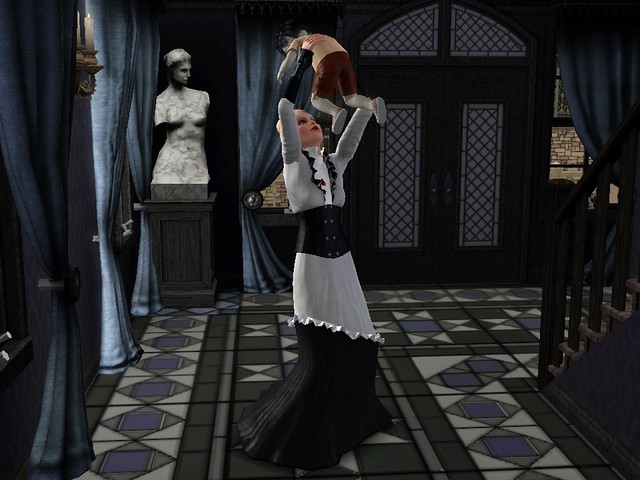 Alice Ballan teen daughter of Victor and Gardenia is a witch like her Mom. She is brave, has a good sense of humor, gatherer and hopeless romantic. Her favorite color is blue, likes electric music, and grilled salmon is her favorite meal. Alice does not have a lifetime wish yet. I don't choose those for teens until I kinda get a feel for their personality. Alice is holding her baby sister Jillian who is twin to Josef. Jillian is perceptive and athletic. She likes the color yellow, classical music and cheese steak is her favorite meal. 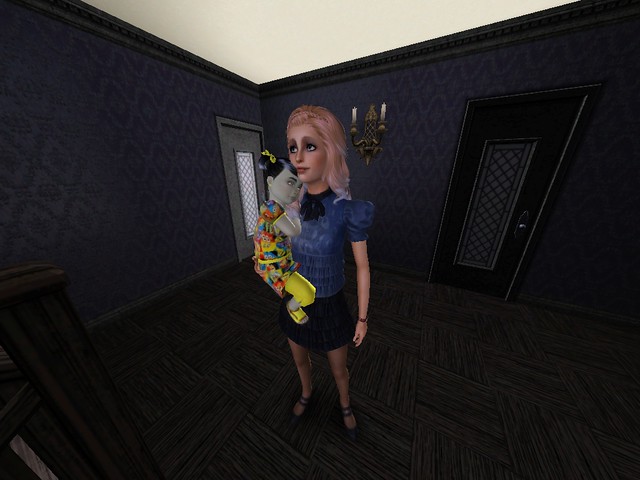 They will have a busy time getting the manor back in shape, brighten it up, start a garden and collect ingredients for potions, studying the alchemy books, tend to two young toddlers and a young teenager who did not want to move to a gloomy town away from her many friends.

Fixing up the Nursery

Gardenia decided to fix up the nursery first. She was determined that her babies were not going to sleep in that dark dreary nursery and have horrible nightmares all night long. 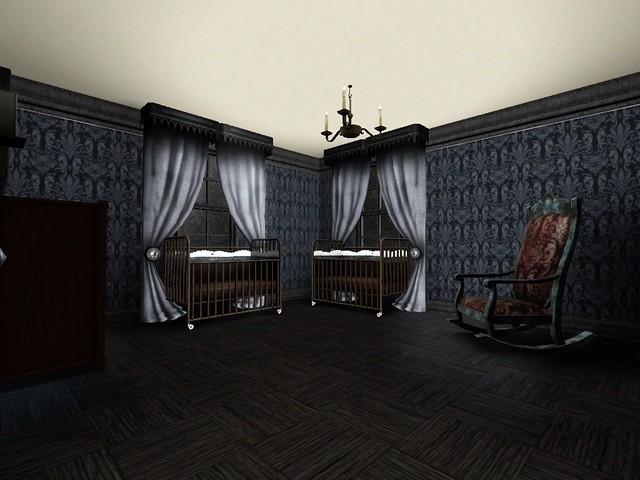 Alice is still a novice at magic, but, can turn her hand at the smaller items like the cribs and bedding. 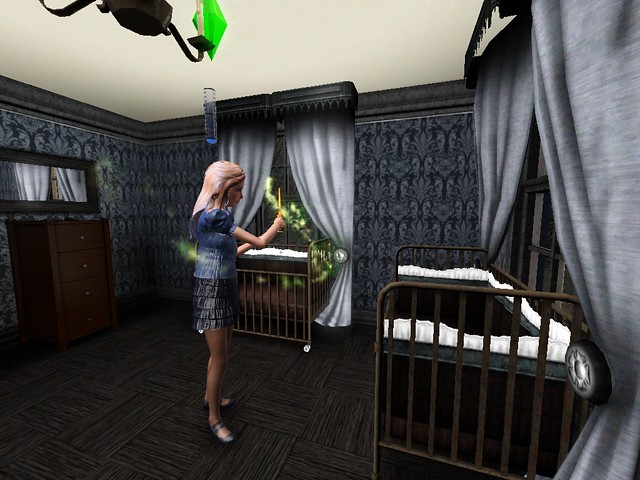 Using her magical skills Gardenia begins to work on the nursery. 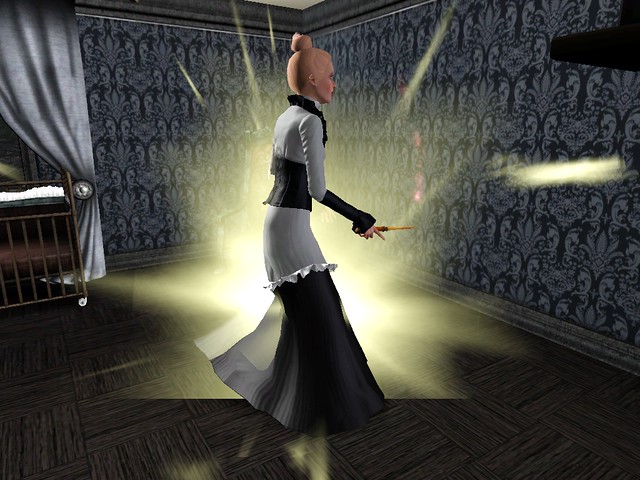 The magic swirls and takes away years of dust, mold, layers of paint, varnish and wallpaper leaving behind gold and white tones and sigh, still a bit of grunge on the wood. Gardenia needs to rest for a bit and will work on it later. 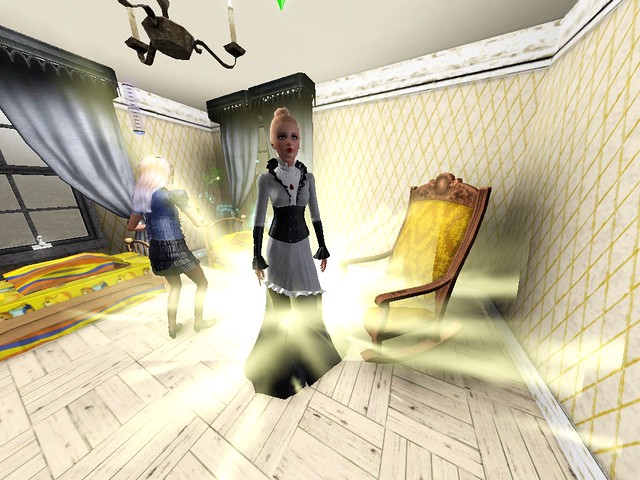 Victor has been around so long he can repair and replace almost any item without much difficulty. 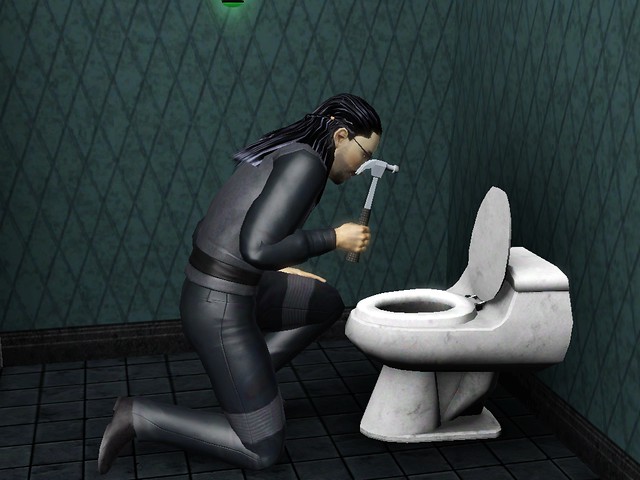 Exhausted, Gardenia picks up Jillian and they rock and rest. 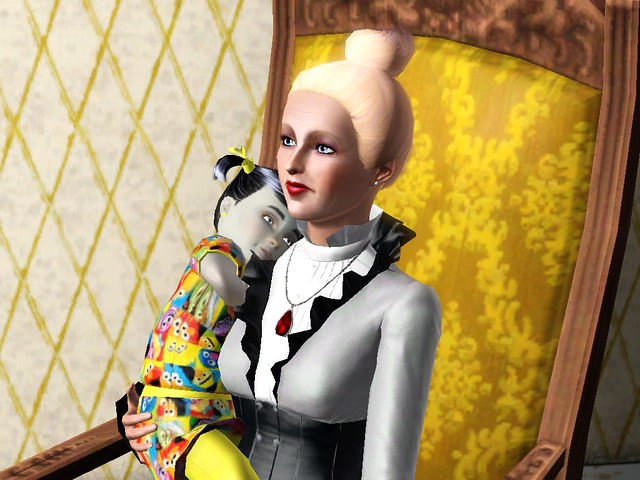 \
Victor finishes the basic repairs in the upstairs bathroom and decides to go check on Gardenia. He is dismayed at how the spells to fix the room have exhausted her. He tells her then and there no more spells. Victor is a bit autocratic at times but she recognizes his concern under the commands. "I will hire the best decorators in the country and it may take longer, but I will not have you sicken from this." 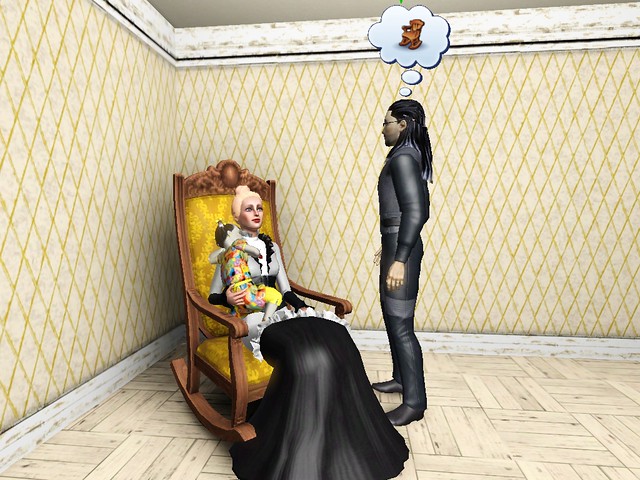 Alice finished fixing up the furnishings in the nursery. The wood work will be done by the professionals when they arrive to work on the house. Josef and Jillian are tucked into their new beds with their favorite vampybears to sleep with. 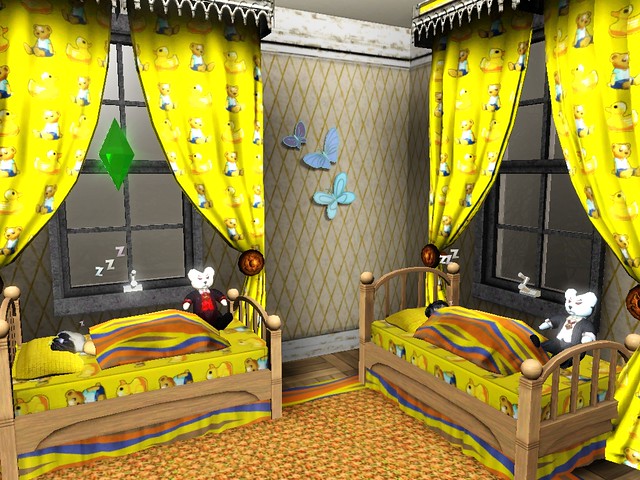 The Cowboy and the Mermaid