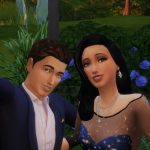 Patch__2008 Posts: 493 Member
September 2017 edited September 2017 in The Sims 4 Challenges, Stories and Legacies
Hey Simmers! S I'm a big challenge and legacy player and have dabbled with a lot of different challenges. However, there is one challenge I've been playing since my Sims 3 days. The Family Man Challenge! I personally love this challenge, it is a challenge where you never rest and I find that to be very fun. However, I can never just play a Family Man Challenge so I modified it to be a legacy. The way I have played this challenge is like the basic Family Man Challenge where you search for baby mommas and try to father as many babies as possible. But, when the father dies I create a new YA male and then have him father children with all of previous generation's daughters. So far I am on generation 2.
My original Family Man was Aaron Whittle and he had 124 children with 20 different women.
Generation 2's Family Man is James Rider. He currently has 83 children with 24 different women. He is currently an adult.