White
Sign In · Register
Home› The Sims FreePlay
August 5th- It's time for our Friday Highlights! You can check them out here!

What happened in your Freeplay game? 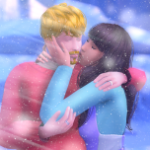 
Anyway, my sim sister's daughter Nicole just aged into a toddler. I Put in a toddler bed in the place of her crib, and another bed for their teenage son Lucas who stays with them.

Meanwhile, for my preteen Chara and a portion of her family, i am building my second apartment.

A bit of Chara's backstory (because her life is quite sad and interesting), my simself's childhood friend (not a real person) Ruby and my simself's husband Tony (also not real lol)'s sister Kathy got married and had Chara. (interesting fact, i have had 4 couples in my game who are same gender.) When she was a toddler they divorced, and got remarried soon after she aged up. Kathy had an affair with a guy named Connor, Ruby found out, they divorced, and Kathy and Connor got married and had twins named Daniel and Julie. Ruby soon met a girl named Anastasia. The two live together as a couple with Chara and her adopted brother Nathan (adopted when Kathy and Ruby were still together) but Anastasia doesn't like Chara, and favors Nathan more. Anastasia also dated 3 other sims (While dating Ruby) so yeah, who knows what will happen with her around.


Anyways, what happened with your sims?

Just vibing...
Check out my stories The Diversity Club and Lost Pride here on the forums!
2