start a legacy challenge together 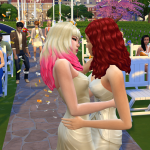 MissCharlie Posts: 385 Member
June 2017 in The Sims 4 Challenges, Stories and Legacies
does anyone want to start a legacy or a sims 4 challenge all together, so we all start off with the same heir and see the different things that happen to the same sim and we update each other in the comments?
4