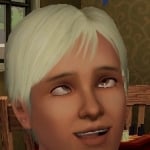 
I mostly created this thread so I could share this very important piece of knowledge:
If a Sim's bladder fails while the Sim is standing near a fire, the peeing will extinguish a bit of fire