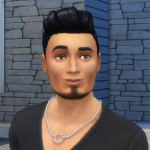 Anthonydyer Posts: 1,040 Member
April 2017 in Stories and Legacies
I love a crazy story from The Sims. So I made this Friends-Style house with 4 males and 4 females. I used that crazy lady that is evil from the premade sims bin. She has the Evil trait, so naturally I had to make her a criminal. Well it turns out another resident of my house happens to be in the law enforcement career. They all live hapily in my house. That is pretty funny isn't it?