White
Sign In · Register
Home› Feedback› The Sims 4 Game Feedback
Fresh off the press - the April 13 Laundry List! Click here to find out more!
April 9 - It's time for our Friday Highlights! You can check them out here!
Welcome to all NEW SIMMERS joining us on the Sims forum! 🎉 Have fun on the forum and please make sure you check out the forum rules and
the rules about necroposting.
Sul sul Simmers! It's awesim to see that so many of you are starting new and interesting discussions! But please make sure that you do so in the right forum section. Thank you! 🙂 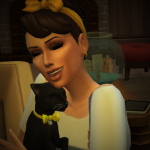 ExxCee Posts: 262 Member
February 2017 in The Sims 4 Game Feedback
On almost every post in this section there's a mention of how TS3 was so great because of open worlds. I agree - it was great - however, not having open worlds in TS4 means the game is a lot smoother (a lot) and in my opinion it looks better and cleaner.

HOWEVER... I would love colour wheels to come back. Having the ability to choose individual patterns, colours, schemes etc that matched to your own specifications was what kept the game interesting for me and allowed me to build endless new and totally unique lots. Open worlds were great, but also limiting in some ways and would be harder to reintroduce than a colour wheel (I'm guessing - I honestly don't know the first thing about this). I just find myself always gravitating to the same colour schemes and furniture sets because they work well and I know they do, but it means all my builds look the same!

If you could only choose one - colour wheel or open worlds - which would be more important to your game? Or are you loving TS4 just how it is?