White
Sign In · Register
Home› The Sims 3› Creative Corner› The Sims 3 Stories and Legacies
October 16 - Everyone ready for the Friday Highlight? It's ready for you here.

Wizards in the Muggle World Challenge 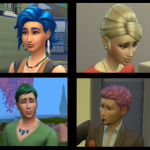 Theseareourlives Posts: 126 Member
November 2016 edited January 2017 in The Sims 3 Stories and Legacies
Disclaimer: I do not own the Harry Potter franchise, or own the copyright to the terms 'muggle' or the type of wizards modeled in this challenge. I merely take inspiration from J.K. Rowling's series. I also took some inspiration from the 100 baby challenge, so you may see some similar rules. This is my first challenge and I hope it brings many people joy! If you take on this challenge please include a hashtag with your characters to inspire others! Have fun! #wizardsinthemuggleworld

Wizards in the Muggle World

Objective: To raise as many children as possible into healthy adults without being caught by the Muggles! The Sim with the most children at the end of his/her lifespan wins.

Storyline:
You’re the last of your Pureblood family line, and your vault is almost empty. What’s a Pureblood wizard to do? The Ministry is offering a challenge to repopulate family lines. You and three friends decide to dare each other to complete the challenge. You must enter into the Muggle world in disguise, taking with you a minimum of Galleons given to you by the Ministry which they have converted to Muggle currency. There, you must purchase/build a home to live in and persuade Muggles of the opposite sex to have children with you without revealing yourself as a wizard. Your half-blood children will be fresh blood to fuel your dying family line! You must also provide for and raise your children into well-educated adults. As an added incentive, the Ministry has added a bonus sum of $100, 000 Simolians to whichever family can raise the most future wizards.

You Need: The Sims 4 “Get to Work” Expansion Pack

Setup:
Rules:
Scoring Points: To do this:
Post edited by Theseareourlives on January 2017
1