White
Sign In · Register
Home› Off Topic Chat
April 9 - It's time for our Friday Highlights! You can check them out here!
Welcome to all NEW SIMMERS joining us on the Sims forum! 🎉 Have fun on the forum and please make sure you check out the forum rules and
the rules about necroposting. 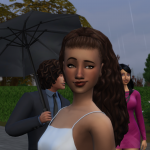 That's not blankness! It's the inevitability of death!

That was a bad example, but you get the picture, right?
I'll start.

That's not a brick! That's a shack!