White
Sign In · Register
Home› Feedback› The Sims 4 Ideas Corner
July 31 - Everyone ready for the Friday Highlight? It's ready for you here!
July 23 - A patch for The Sims 4 is ready for you to install it! Check the patch notes out here.
The Sims Spark'd is here! - are you ready? Discuss episode 3 here! 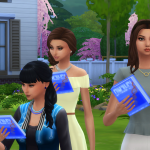 ImGluedToMyComputer Posts: 188 Member
August 2016 in The Sims 4 Ideas Corner
I think teens in the sims 4 are just adults that go to school and young adults are just adults. Teens and young adults should get acne be shorter and less mature then adults. Young adults should have the option to live in apartments and call their parents for help and money to pay rent. Teens should act out and have curfews, want to move out, have better careers and playable school. And when your in high school there is SO MUCH DRAMA and that should be incorporated! Teens also need school parties like prom, and have teen parties like they did in the sims 3 generations!
Soo... When do we get preteens playing in snow?
5