White
Sign In · Register
Home› Feedback› The Sims 4 Game Feedback
July 1st- It's time for our Friday Highlights! You can check them out here!
The Sims 4: High School Years EP launches July 28th! Click here to find out more!

Death in TS4 - Many Changes Needed 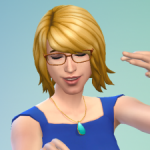 Terra Posts: 1,353 Member
August 2016 edited May 2018 in The Sims 4 Game Feedback
There are many topics that include players expressing frustrations with the death mechanics in TS4, so I thought it would be handy to have one master topic here. Here are some of the most common concerns with the way death currently works in TS4 that I see here on the forums, plus a few of my own added on.

Sims who die off-lot leave no gravestone.
The Sims team fixed this in a patch! I haven't tested it in-game yet, but @SimGuruNick posted in another thread about how the November 7th patch changed tombstone generation to include Sims who die off-lot.
- Without a gravestone, it becomes much more difficult to banish an unwanted ghost to the Netherworld. When ghosts can’t be banished, many players experience ghosts clogging up their worlds. Every dance party or night club my Sim goes to is attended by ghosts, taking up spots on the lot that could be filled by Young Adults and Teens (or whatever other life stage you want at your dances). For Simmers who play without mods that remove culling, this means that if you don’t want your ghosts taking up precious population space, you have to delete the ghost, which also removes them from the family tree.
- Ghosts will often invite Sims out to meals and send congratulatory texts. Many Simmers find this feature breaks the immersion when they are playing grieving family members, but without the gravestone available, the ghost cannot be banished and prevented from making further inappropriate contact with the living.
- If you play rotationally with Aging on, your Sims die while you are gone and leave no tombstone or urn to place on the family lot. This means that you can never have family members mourn that Sim, their ghost will also not reliably haunt the lot, and there is no reliable way to summon that ghost, whether to make them playable as a ghost, resurrect them, banish them, or chat with them. Rotational players who want there to be a tombstone have to race around their games, trying to keep track of everyone who’s about to die and sometimes prematurely hurrying them along just so they don’t miss their death. It’s a tiresome and rather demoralizing way to play.
Potential Solutions: Generate a tombstone or urn in an unused spot on a lot if a Sim dies while a player is not on the lot. Or, provide a graveyard (see below) to which graves are automatically sent. Or, notify a player when any Sim in the neighbourhood dies and give them options including banish to the Netherworld and generating a tombstone. Or, give Ghost Sims the option to summon their own tombstones, and make hidden Ghost households visible in Manage Neighbourhoods under a "Beyond the Grave" category so that players can more easily manage the dead.

Sims only notice the deaths of those in their immediate vicinity. Some players have even reported problems of Sims in the same house not noticing a death if they are too far away, for example, on a different floor.
When family members, friends, or other important Sims die while living in a different household, the Sims in your active household have no idea. The deaths of parents, ex-romantic partners, grown children, brothers and sisters, aunts and uncles, grandparents, old friends, sworn enemies, etc. goes unnoticed. This is not realistic and undermines the deep and complex relationships many Simmers try to cultivate between their Sims.
Potential Solutions: If a Sim has a relationship other than ‘Acquaintance’ with another Sim, provide a custom moodlet based on their relationship status when one of the Sims dies. There is already a mechanic that blocks ‘marked’ relationships from relationship culling, so this could build on that coding to recognize which relationships merit special moodlets. If a Sim has mixed positive and negative relationships, give them mixed emotions (eg how an ex-lover can be marked as both ‘Soulmate’ and ‘Bad Romance’ at the same time). If the Sim’s enemy dies, a Good Sim might feel sad that the relationship was never repaired, while an Evil Sim might cackle maniacally. And, of course, if a Sim loses someone who is unequivocally loved, let that Sim receive an appropriate moodlet.
A partial solution would be to add an 'Inform of Death' option so that Sims who did not witness the death can still be affected by it. However, this still doesn't account for Sims who die without any witnesses but whose loved ones (or enemies) would still be affected by their passing.

There are no graveyards.
- Simmers who play multiple generations of a single family often want to keep the tombstones of deceased Sims. (See above for the many benefits of having a Sim’s tombstone.) Over time they may run out of room for the family graves, particularly on smaller lots. If graves could be deposited in a designated community lot, players would not have to fit the tombstones onto their own lot. This mechanic existed in TS3.
- There are very few people in modern western society (on which TS4 is based) who do not bury their dead in graveyards, so it is more realistic to have a graveyard. Graveyards are meaningful and, in some cultures, a focal point for family activities on certain days of the year (such as on the Vernal Equinox in Japan, or Dìa de los Muertos in Mexico) so having a graveyard venue would enable players to tell stories that incorporate these activities. In general, graveyards serve as a focal point of family memory and would enhance family play if included.
Potential Solutions: Add a Graveyard venue type.

There are no funerals or wakes.
Sims cannot come together to mourn the loss of a loved one. Funerals are an important part of life. Especially for Simmers who get pretty attached to their Sims, it would be nice to be able to have a proper send-off. It could also be a cathartic experience for the Sims who are sad about the passing.
Potential Solutions: Add a funeral or wake Social Event type. There are many good ideas about interactions and gameplay that might be associated with funerals in this thread: http://forums.thesims.com/en_US/discussion/894854/i-think-it-would-be-good-to-have-funerals-in-the-sims-4#latest

Time does not speed up when ghosts are haunting a lot while all other Sims sleep.
This is mostly an annoyance. This has been fixed with guests but not with ghosts. Simmers who want to watch the ghost run around breaking everything in real time can always switch back to the regular timers, but for Simmers who want to speed through the ghostly activities on the super sleep speed, there is currently no option to do so.
Potential Solutions: Make the sleep speed continue while a ghost is haunting the lot by default.

Sims get no special interactions shortly before they die. Players are notified that a Sim should put their affairs in order, but it would be nice if Sims could receive special interactions during this time, as its gameplay is currently indistinguishable from regular Elder gameplay.
Potential Solutions: There are a lot of options here. Writing a will to leave money or Inventory items to other Sims; having special ‘Make Amends’ interactions with enemies or Sims who you have wronged or been wronged by; give parting wisdom to younger Sims; make special philanthropic donations; etc.

Random deaths are extremely rare.
Some players miss the rare random deaths that were possible in previous Sims games, such as meteors falling while cloudgazing in TS2. Other players feel that deaths such as electrocution and cowplant in TS4 are less fun because they are 100% preventable with the warning moodlet; these players would prefer that the decision about whether their Sim dies from those actions is left to chance. As it is now, players are left with the decision of whether to repeat the action (such as electrical repair or feeding the cowplant), which takes away the surprise and some of the fun.
Potential Solutions: Give players the option in Gameplay Options to turn off "warning" moodlets for deaths such as electrocution or death by cowplant. Plenty of players prefer the current system, though, so please do not change this without making it an optional toggle. If rare and random deaths such as meteor crashes are added, please provide a toggle for players who do not want that feature, whether in the Gameplay Options or through a simple cheat code.

The "Read Obituaries" interaction on the computer has no connection to in-game deaths.
In TS3, when your Sim read the newspaper they might be notified of local goings-on, such as a recent marriage or death. In TS4, certain Traits and Moods unlock the ability to "Read Obituaries" on the computer, but this interaction is totally disconnected from what actually goes on in your game. (See this thread.)
Potential Solutions: Create pop-up notifications like those that existed in TS3 that report recent in-game deaths when a Sim uses this interaction. If the Sim had a personal relationship with the deceased, give them a corresponding moodlet after they read their death notice.

Marital links are not preserved in family trees after Sims die.
When a Sim gets married, their spouse will be connected to them on the family tree even if they have no children. However, when one of the spouses dies, the marital link disappears. The spouse will only remain on the tree if the couple had children because both partners are still genetically linked to the child. This means that childless couples' marriage will not be preserved in the family tree, and the link is severed as soon as one of the spouses dies. It also means that step-relationships disappear completely after one of the spouses dies, even if that person raised their step-children and should by all rights have a familial bond with them.
Potential Solutions: Adjust the family tree system to work like the premades had in Sims 2, where deceased spouses remained on the family tree (e.g. Michael Bachelor remaining linked to Dina Caliente).

Young dependants are deleted from the game if all the adults in their household die.
Thanks to @SkyeChimes for pointing out that toddlers, babies and pets disappear if your YA/adults/elders in a household all die. This even happens in households where the children have parents or older relatives living in a different household. Deleting orphans as if they never existed is a serious problem in the game mechanics. It disrupts the family tree, robs the player the chance to tell certain stories, and seriously breaks immersion, leaving all Sims disturbingly unaware that a child has just disappeared.
Potential Solutions: Return to the TS2 system where orphaned dependants would be put into the adoption pool, just like children taken from the social worker. (Note that this may necessitate a reform of how adoption works in TS4, since currently there is no standing pool, but several families generated every time a Sim tries to adopt.) Or, send the dependants to the household of a relative or friend if there is room. Or, create an "orphans" household that the player can use to manually add these children to different households.

Please keep your discussions respectful.
Post edited by Terra on May 2018
My ideas for how to improve the Sims 4
Add Manage Neighbourhood Options - assign your own Sim to NPC jobs!
The Problems with Death in The Sims 4
Distinguish Elder gameplay with Elder-only reward traits
Filter Rugs by Room Size
107