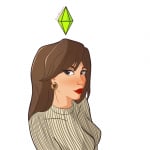 So tell me, what has happened in your game today?
Post edited by Simmerella on May 2016
53