I hope they announce something this week! 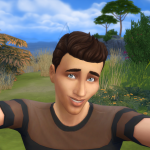 Aussie_Simmer Posts: 2,623 Member
April 2016 in The Sims 4 General Discussion
I think it's time for some content.... please release the game developers!