White
Sign In · Register
Home› The Sims 2
Never met your online BFF but want to? Share your story with us here for a chance to win an all-expenses paid, meet up with your BFF IRL.
The Sims 4 will be FREE to download across PC/Mac & Consoles on October 18! More info here: here

What happen in your game today/most recently? 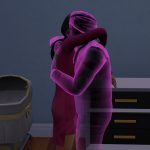 Today my second generation, Douglas died along with his husband. Their son grew up into a adult the day after, and right now he's in a relationship with a sim I've had saved for him since he was a child. She is pregnant, and I plan on marrying them soon!

To sum this up, my third generation started, and some business work!
13