White
Sign In · Register
Home› The Sims 3› Creative Corner› The Sims 3 Stories and Legacies
January 21: Today is patch day! 😃 To read the patch notes, click here!
January 22 - Is everyone ready for the Friday Highlights? Check them out here.
Welcome to all NEW SIMMERS joining us on the Sims forum! 🎉 Have fun on the forum and please make sure you check out the forum rules and
the rules about necroposting. 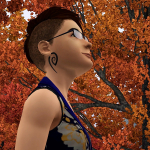 RipuAncestor Posts: 2,204 Member
February 2016 edited May 2016 in The Sims 3 Stories and Legacies
Meep! Hi! It's me. You may remember me from The Fey of Life. I've been working on another story, and now I've finally polished the first chapter and the general storyline and ideas and the page enough so that I can put a link to it here. This doesn't mean that I'm giving up on The Fey of Life. In fact, I'm already working on the next chapter of that story as well. This is something that lets me occasionally do something different-ish and to help my own mind by purging this idea into story form.

Anyway, without further stalling, here's what this is about:

Amelia Sprigg decides to become a landlady to solve her money problems and to hopefully make new friends. It’s a simple plan, really, but nothing is simple when she unwittingly accepts a rather eccentric young man named Tad Dustpine as her tenant. After that it’s only a matter of time before Amelia’s life is filled with magic, potential danger, and ontological questions.

But maybe it’s not so bad. She does at least make new, very extraordinary friends and realise that she too is rather extraordinary in her own way.

The story can be found HERE. The first chapter is already out!

Also, HERE is an introductory post that talks about the story some more.

I hope you enjoy it, and I'd love to hear feedback even now when only the first chapter that basically sets the scene and introduces two of the main characters is out. The story is going to pick up in the next chapter already, so have patience!

Also, have a very good day, everyone!
Post edited by RipuAncestor on May 2016