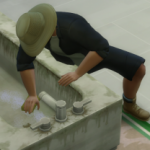 How is everyone? It’s the holiday season… have you been good?

…you know, nobody ever really defined for me the limits of good in the context of the holiday seasonal question of naughty or nice. I was mostly good… I hope.

Anyway, given that I have also failed to define “good” for you, we have plenty of gifts to pass around no matter what your naughty/nice standing may be with the polar ice powers.


So, on with the unwrapping… what’d you get?
THE NEW!

But wait… there’s more!
More, Billy?
…we have a few issues we have been looking into as well.
But that’s not all?