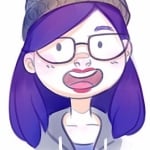 SimGuruDrake Posts: 1,648 SimGuru (retired)
November 2015 in PC - Technical Discussions
What is 64-bit?
All modern versions of Windows are available in two flavors: 32-bit and 64-bit. Most users on Windows 7, Windows 8 and Windows 10 are using the 64-bit version.
How does this impact The Sims™ 4?
Prior to version 1.13, The Sims 4 was only a 32-bit application.
As of version 1.13 (released December 2015), The Sims 4 can be run either as a 32-bit application or as a 64-bit application.
For most players, Origin will automatically choose the correct version to run and this is not something you need to worry about.
​
What is better about the 64-bit version of The Sims 4?
Short answer: The Sims 4 will be more stable when running the 64-bit version.
Long answer:
The Sims 4 is designed to use less than 4GB of memory, so in most cases there is no difference between the 32-bit and 64-bit versions.
However there are scenarios where the game may take more than 4GB memory.
For instance, if you are playing on large heavily populated lots.
With the 64-bit version of The Sims 4, the game will no longer crash when these scenarios are encountered.

I received the following dialog when starting the game, what does it mean? 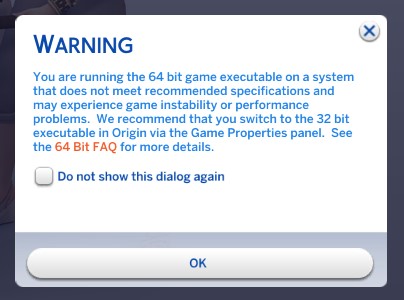 It means you have less than 4 GB of memory or you are on Windows Vista. In these configurations we recommend manually switching back to the 32-bit version of The Sims 4.

Global Community Manager for Maxis / The Sims
38
This discussion has been closed.
Return to top