White
Sign In · Register
Home› The Sims (2000)
Simmers! Did you miss the Behind the Sims Livestream on Twitch? You can still check it out here. You can also follow along in the dedicated thread here as well.
It's Patch day! The latest update is now live for The Sims 4 which includes a whole heap of bug fixes and console improvements. Click here to read the notes.
January 27th- It's time for our Friday Highlights! You can check them out here!

What happened in your first ever Sims family? 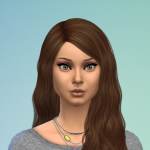 thankucatgod Posts: 398 Member
November 2015 edited November 2015 in The Sims (2000)
I was just thinking about when I first started playing The Sims. I was quite young, maybe 6 or 7. I remember making myself in CAS (or choosing a blonde head, lol) and cheating for money to get a nice pretty big house. I remember I kept trying to walk the superstar runway, wondering why I kept getting yelled at, not knowing I had to have star points. I took her out for mud baths, fancy dinners, winter wonderland vacations, I even got her a pet!

And then I decided to switch houses and throw a party. Baaaad idea. I got them a pool for the special occasion. Everything was going really well, until my sim showed up and decided to go for a dip in the pool. Needless to say she drowned and I actually cried. I had no other choice but to save the game because I had gotten so far with the other family... And that was the end of my very first sim. I never dared to make my simself again in fear that I would die tragically once again.

Feel free to share your first Sims 1 family stories here! Hopefully they aren't as tragic as mine.
6