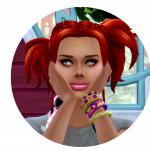 pammiechick Posts: 11,746 Member
November 2015 edited September 14 in The Sims 4 Challenges, Stories and Legacies
I wanted to start my own ISBI story since they're really crazy and FUNNY!