White
Sign In · Register
Home› Creative Corner› The Sims 4 Challenges, Stories and Legacies
July 20th: The latest patch is live! To read the patch notes, click here
July 16th - It's time for our Friday Highlights! You can check them out here! 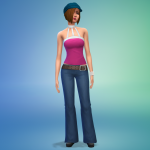 She's new in town. And she's quite the interesting sim. The first thing you'll learn about her is that she's insane, no doubt about it. She's also a slob. So at first it may be hard for most to take a liking to her. But she's a goofball, and its a guarantee she'll make you smile. Fun can be found in anything when you're with Laura. Loving all things mischievous, she's quickly taken a job in the Criminal career line. She thought that would be the best environment for her, as she could just be herself without having to conform to society's "normal" standards. Her next steps will be to meet someone, maybe fall in love, maybe have some kids, and definitely, she will become known as the towns matriarch for the crazy, loopy family that everyone whispers about behind closed doors.

As we follow Luna's story, I will be playing the ISBI challenge for TS4 by @Lynnwood , as found here

The goal is to go 10 generations while controlling only one sim until the next generation comes of age, and then control will switch to the next heir. All TH's (or torch holders) will have the insane trait, while all other traits and aspirations will be randomized. I have always controlled every sim in my households, and I've never played much with the insane trait, so a lot of this will be new to me. I've never completed a challenge before, as it always felt overwhelming trying to corral all the sims to accomplish what needed to be done as my families got bigger and bigger. I'm hopeful that i can make it to the end with this one.