White
Sign In · Register
Home› The Sims Medieval
January 27th- It's time for our Friday Highlights! You can check them out here! 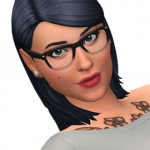 SimplyJen Posts: 14,281 Member
September 2015 in The Sims Medieval
I haven't played this game in years. When I first got it, I remember fighting over the game for a week with my husband (boyfriend at the time). One game copy and one computer so we had to take turns.

I grabbed Pirates & Nobles on sale a year or two ago but I don't think I played with it much. Watching the game install now with Pirates & Nobles in the download queue. Please share any screenshots that you have. I would love to see them. I will post mine when I find the time to play.
Formerly known as Simasaurus09