White
Sign In · Register
Home› The Sims 3› Creative Corner› The Sims 3 Stories and Legacies
January 21: Today is patch day! 😃 To read the patch notes, click here!
January 15 - Is everyone ready for the Friday Highlights? Check them out here.
Welcome to all new Simmers joining us over the holiday season! 🎉 Have fun on the forum and please make sure you check out the forum rules and
the rules about necroposting. 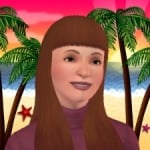 I'm a latecomer to the Sims 3 and to the legacy challenge. I've decided to try a legacy almost completely according to Pinstar's rules -- the only one I will ignore is the one about randomising the children's traits.

***
Before starting the game I slightly modified Sunset Valley, trying to make it more international. I built a Sim Fu Academy in town, and a Chinese restaurant (actually, a community hangout with a food register and juice bar) on stilts above the sea: I moved into town two Sims I made after fictional characters, Elizabeth and Fitzwilliam Darcy from "Pride and Prejudice", and sent them to test the restaurant. Christopher Steel is working at the food register. I turned the empty lots at Pinochle Point into a Little France, with a nectary, a cafe and French-styled homes. I also made Sim versions of "Poirot" characters Hercule Poirot, Arthur Hastings and Felicity Lemon and moved them into town. I also moved in some edited versions of Sims from Al Simhara, Champs Les Sims and Shang Simla. I love creating characters and releasing them into the game, and then seeing what story progression will do with them. It would be fun if, a few generations later, a Sim from my legacy marries a descendant of the Darcys or of Poirot, or a Sim who inherited the Chinese, French or Egyptian hidden trait.