Using lots of images or hitting us with an absolute novel? Please be courteous and use a spoiler tag for your post. Thanks!
August 5th- It's time for our Friday Highlights! You can check them out here! 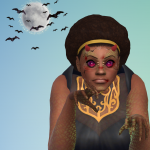 Charliimai Posts: 1,773 Member
May 2015 edited June 2015 in The Sims 4 Challenges, Stories and Legacies
I have Created a Legacy Game called the Accidental Time Traveller Legacy Challenge. See the site for more indepth information.

Basic description>
You Are the Accidental Time traveller you are tasked with surviving at least 6 complete generations ( Your founder and her/his 5 Heirs to Adulthood).
Starting with only a Small Tent, Campfire, Cooler and public restroom on a 30x20 lot.

for Any simmers Attempting the challenge. Good luck and Happy Simming

Read my Legacy story's or atttempt one of my Sims 4 challenges.
Charlii Mai's Blogs and Challenges

Read All of my Latest stories all in one place.
RainbowPlumbob (Wordpress)