Using lots of images or hitting us with an absolute novel? Please be courteous and use a spoiler tag for your post. Thanks!
The Sims 4: High School Years EP launches July 28th! Click here to find out more! 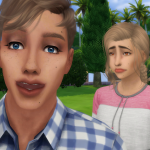 Have Fun
No cheats
Life-span set to normal
Third party content is allowed
Choose the heir by any means you want
The next generation starts when the heir you choose hits YA (even if the previous generation has not achieved their goals!)
Spouses may be employed
Points:

Generation One – The Farmer

"I always wanted to be a farmer. There is a tradition of that in my family."

Your family was always into the farming deal. They spent their days working hard and asked their children to do the same. When you turned 18, your parents surprised you with your own plot of land to continue on tradition. Having always been one to want to impress the folks, you began creating your own garden; you'd rather dedicate your life to that than a dreadful 9 to 5 suit and tie anyway.

Grow a garden with every type of plant from the store in it (you may buy 5 of them, the rest you have to find on your own)
Get married, but no woohoo before marriage
Have a boy and a girl. Keep trying til you do!
Master the garden skill
Complete 1 collection
Have and complete one of the nature aspirations
No gardeners! You may join the gardening club, however, you may not call a group meeting at your house more than once a week.

"I was expected to be a farmer like my father and siblings. I broke tradition. It was great."

Life with your hands in the dirt wasn't the life for you. You always craved to spend more time in the city, yearning for the excitement and noise. You knew there were more to life than seeing seeds sprout into plants or fishing in the local pond. Besides, your siblings were more than happy to help our on the farm - your family didn't need you too. You decide to follow your heart, and move to the city.

Become enemies with your father and/or mother (why can't you be like your brother or/and sister?) before entering your career.
Marry someone your parents hate.

Move to San Myshuno on your own and live in an apartment that needs TLC until you save enough for a nicer place (20,000 household funds) – move back into your old home when one of your parents die in order to take care of the survivor.
Do not take your family's money with you when you move out – your parents do not support your decisions and will not help you with anything.
You love the city – attend every festival that you can (exceptions for if you are at work or on a date/attending a wedding, ect).
Get to level 10 in the Business Career OR doctor career.
Get to level 10 in Charisma skill.
Get married.
Have at least one kid.
Have and complete a Fortune Aspiration OR City Native Aspiration.

“My parents were always working, I was left alone. I learned how to live, how to survive, on my own."

Your parents have always seemed to spend more time in the office than home. So you decided to go to different places and see the world outside your own town. Better than remaining at home, that was for sure.

Join Mixologist Branch of the Culinary Career, get to level 8 (Chief Drink Operator)
Have the noncommittal trait
Kiss 6 sims
Be boyfriend/girlfriend to 2 sims then break their hearts (you can be married to one and dating the other).
Get married and have kid(s).
Kill/divorce spouse, then repeat above step (as many times as you'd like but at least once).
Throw a party (any type) at least once a week.
Host a gold rated house party.
Have the serial romantic aspiration and complete it.

Go on at least 10 dates
Get a gold rating on at least one date.
Complete any break-up/divorce whims your sim has
Get Together Optional Expansion Path:

In addition to the objectives above also...

Have the DJ skill maxed out
DJ at a nightclub once a week
Max out the dance skill and win 3 dance battles
Accept any invitations to a nightclub or party unless it conflicts with work, social events, ect.

Your parents have led an interesting and dark life. With rich and vivid stories that were always told to you, both to entertain and warn, a creative spark was ignited in you. They filled you with the need to write and paint the images they spoke about.

Marry, woohoo, have kid(s)
Have a creative aspiration and complete it
Master Writing skill
Write at least 10 books
Join Writer Career, Author Branch and get to level 10
AND/OR

Be good friends with parents (parent) and siblings
Get 10,000 in royalties And/Or sell 10,000 in paintings
City Living Optional Expansion Path:

"Though it might not be quite from my parents, I learned to play the guitar, and sing simple songs."

It must be that creative gene because you were born with a guitar in your hand. You've played it ever since you were able to pick it up, not caring if you didn't strum correctly or even well. But that you knew would get better in time. As it always does.

Master Two Instruments (Guitar, Piano or Violin)
Get to the top of the Entertainer Career; Musician Branch.
Have at least three kids
Get married to someone with the music lover or creative trait
Learn all songs

Play for tips at all community lots
Have an affair (can be with a groupie, a maid, ect.)
Have/ Get a tattoo

"Playing cops and robbers as a kid, I always wanted to kick bad-guy butt."

You always wanted to take out the bad in this world. And no matter what you'd try your hardest to prevail over the evil in your town. That was your motto anyway and thus is why you trained yourself so as to be great at what you do.

Join Secret Agent career, Diamond Agent route and complete it
Max Logic skill
Max Athletic skill
Marry your high school sweetheart
Have children as a YA
Donate to charity once a week

Get to Work Optional Expansion Path:

"Some people just want to watch the world burn."

There was something about you. You were different from the others. Could it have been you were smothered in too much love from your parents or you were just born that way. Either way, things are going to change around here. For an evil better...

Join Criminal Career (either branch) and reach max level in chosen branch.
Have one of the Deviance Aspirations
Master Athletic skill
Master Charisma skill
Marry as an adult after at least two failed relationships and turn your spouse into a criminal mastermind
Have one child (you want the perfect evil child)
Be good friends with your child until they come a teen
Have 3 enemies
Perform at least 1 mean interaction a day and pull pranks/cause mischief at least once a week.

You grew up in the seedy underbelly, exposed to harsh realities far earlier than any child should have been. At first you thought your parents were cool – they took what they wanted, when they wanted it and allowed you to do the same. However, as you grew older you realized the harm they were causing and became determined to expose the very environment that helped shaped you.

Get into fight with parent(s).
City Living Optional Expansion Path:

You grew up with a silver spoon in your mouth. Anything you asked for your parents gave you and if they ever dared to say no, you screamed until you got your way. You never had to earn anything and now, as heir to a fortune, you don't see any point in working. You spend your family's fortune on lavish dinners, spa days and whatever else might catch your eye.

Marry and woohoo a sim of your choice
Have two kids
Do not get a job (spouse can but the ‘heir’ cannot)
Do not help kids with homework or read them books. Do not teach the toddlers any skills or change their diaper/bathe them. Note: You are the fun parent! You can play video games with the children, you may take them to the park, you can help with with any fun skills you have maxed! If you have the parenting pack you MAY NOT discipline your children or ground them, but your spouse may!
Spend your family fortune – strive to get it just above what your bills are.
Heir must have 3 hobbies from this list (if it is a skill, max it! If it's a collection, complete it! If it's both, choose either collection or max skill): photography, woodworking, herbalist, frog collecting, fishing, gardening, painting, writing, causing mischief, video gaming, baking, collecting insects, yoga/meditating, collecting fossils, collecting post cards, bowling, or collecting snow globes.
Read 15 books
No dish cleaning, puddle mopping, shower cleaning or any other chores. You have a maid/butler for that (or a spouse).
Optional Objectives:

"I don’t know why but I’ve always been fascinated with science, the Earth and space. The unknown is enthralling."

Despite the fact that your family has never placed any importance on science or education, you always found yourself gazing up at the night sky. The mysteries the stars held propelled you into your studies and eventually into your career.

Get married
Get rocket science to level 10
Grow the UFO plant
Get to Work Optional Expansion:

" 'Real' friends? They are my real friends."

Your parents were often busy with their own lives, chasing the unknown. They helped you study and made sure you had food to eat, but you always felt they weren't invested in other parts of your life. You took solace in the digital realm, finding comfort and support through forums, video games and social media sites.

You may only socialize with sims through the computer (the exception is other sims in your household) until you become friends with them. Once friends, you may travel with and invite over that/those specific sims.
Join the Tech Guru career (either branch).
Complete the computer whizz aspiration
Max out programming and video gaming skill
Have at least two children
Optional Objectives:

You may join the Social Media career instead (either branch)
Sources (Credit):