Level 8 of career already checked off, even though only at Level 4 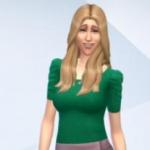 I have read of numerous cases in other aspirations where there was a requirement to reach level 8 of a certain career, and it was already checked off even though they were only at level 4. I assumed these people got caught in the middle of the aspiration by the December 16 patch. However, my new case clearly shows that being mid-aspiration at the time of the December 16 patch is not the problem. The problem is somewhere in the coding of the aspirations themselves.

I'm linking some other folks who have experienced similar:

ETA2: @SimGuruBChick, I'm tagging you also, because I want to be sure someone sees this.